Comets are the largest objects in our Solar System.

Comets are often called “dirty snowballs” because the solid center of a comet, called a nucleus, contains rock particles trapped in frozen liquid. They can measure up to ten miles across and have tails that can extend millions of miles into space. 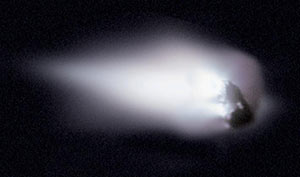 In 1986, the European spacecraft Giotto became one of the first spacecraft ever to encounter and photograph the nucleus of a comet, passing and imaging Halley’s nucleus as it receded from the sun. Credit: NASA/ESA/Giotto Project

As a comet moves closer to the Sun, the heat from the Sun turns the outer ice into gas and the solid particles are released as dust. These gas and dust particles trail the comet in the form of a tail. Sometimes two tails can be seen, a gas tail which is bluish in color, and a dust tail that looks yellowish. Because the tail of a comet is always pushed away from the Sun by solar winds, the tail can be either in front of the comet or behind it.

A comet orbits the Sun in a long egg-shaped path. It can take a comet anywhere from a few years to hundreds of years to orbit the Sun.

A comet’s orbit takes it far out into space, so we usually don’t see it until it enters Jupiter’s orbit. By this time, the Sun has melted some of the ice, releasing the gases and dust particles. The dust and gases reflect the Suns’s light making the comet visible.

Comets may not be able to support life themselves, but they may have brought water and organic compounds — the building blocks of life — through collisions with Earth and other bodies in our solar system. 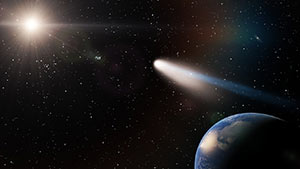 Halley’s comet was discovered by Isaac Newton and Edmund Halley in 1680. Halley believed that the same comet had appeared about every 76 years, and he predicted that it would return in 1758.

The comet did return in 1758 and was named Halley’s comet in honor of Edmund Halley. Halley’s comet’s last visit close to Earth was in 1986. Can you predict when it will return?

On March 14, 1986, the European Space Agency’s Giotto spacecraft passed within 600 km of Halley’s nucleus. Two hours before close encounter, Giotto began to be hit by thousands of dust impacts. The spacecraft survived, and altogether more than 2000 images were returned from Giotto before its camera was destroyed. The images showed Halley’s rough and porous nucleus to be a dark peanut-shaped body, 15 km long and 7 to 10 km wide. 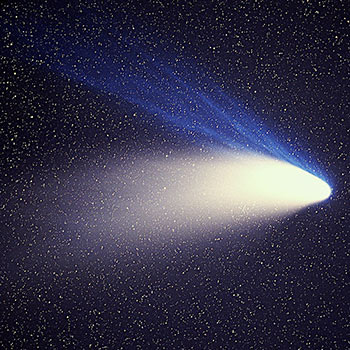 Hale–Bopp was discovered on July 23, 1995 by Alan Hale and Thomas Bopp prior to it becoming visible on Earth.

On July 23, 1995, an unusually bright comet outside of Jupiter’s orbit (7.15 AU!) was discovered independently by Alan Hale, New Mexico and Thomas Bopp, Arizona. Hale–Bopp had its closest approach to Earth on March 22, 1997 and as it passed perihelion (the point in the orbit of a comet at which it is closest to the sun). On April 1, 1997, the comet was brighter than any star in the sky except Sirius.

The comet was visible well before the sky got fully dark each night, and was visible all night to northern hemisphere observers.

It was visible to the naked eye for a record 18 months, twice as long as the previous record holder, the Great Comet of 1811.

Accordingly, Hale–Bopp was dubbed the Great Comet of 1997.

What are asteroids and meteors?