Home / What are asteroids and meteors? 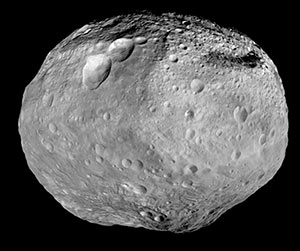 NASA’s Dawn spacecraft studied the asteroid Vesta from July 2011 to September 2012. The towering mountain at the south pole – more than twice the height of Mount Everest – is visible at the bottom of the image. Credit: Image credit: NASA/JPL-Caltech/UCAL/MPS/DLR/IDA

Asteroids are tiny rocky planets that orbit the Sun. They can be as small as 1 kilometer(km) across or as large as 940 kilometers (about 583 miles) across. There are thousands of asteroids in our Solar System. Most of them can be found in an asteroid belt between Mars and Jupiter.

Asteroids whose orbits cross the Earth’s orbit are called Apollo asteroids. There are so many asteroids that scientists just identify them with numbers or they may name them after people.

About once a year, an automobile-sized asteroid hits Earth’s atmosphere, creates an impressive fireball, and burns up before reaching the surface.

Geological evidence has shown that an asteroid roughly 10 km (6 miles) across hit Earth about 65 million years ago. This impact made a huge explosion and a crater about 180 km (roughly 110 miles) across. Debris from the explosion was thrown into the atmosphere, severely changing the climate, and lead to the extinction of the dinosaurs and many other species.

A mission in NASA’s Discovery Program, the Dawn spacecraft mission orbited and explored the asteroid Vesta and dwarf planet Ceres, celestial bodies believed to have formed early in the history of the solar system. NASA has a website dedicated to the mission. The Dawn mission has achieved several important firsts in space exploration. It is the only spacecraft ever to orbit two destinations beyond Earth and the only to orbit an object in the main asteroid belt between Mars and Jupiter. The giant protoplanet Vesta was confirmed to be a fascinating world more closely related to the Earth than to typical asteroids. Dwarf planet Ceres, larger yet less dense, is believed to have a large amount of ice and may even have subsurface liquid water. Ceres was the first dwarf planet discovered and Dawn is now studying it in detail. 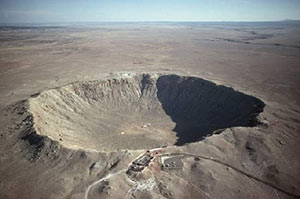 The 4,000 foot wide and almost 600 foot deep Meteor Crater owes its startlingly lunar aspect to both a relatively young age, about 40,000 years, and the arid climate of the northern Arizona desert in which it is situated.

Meteors or “shooting stars” are space particles that have either been left behind by comets, or broken off from asteroids. Meteors orbiting the Sun are called meteoroids and are made of rocks and chunks of metal like iron and nickel.

A falling meteor is spectacular to watch as it leaves a bright trail of light across the sky called a fireball.

Sometimes the Earth passes through a stream of meteors called a meteor shower. Meteor showers can be seen in the sky almost on the same date each year. The best ones occur around January 3, August 12, and December 14.

Millions of meteoroids enter the Earth’s atmosphere, but most burn up before they reach the surface of the Earth. Sometimes, however, a large meteor does not completely burn, and what is left crashes to Earth. A meteoroid that lands on Earth is called a meteorite.

Large meteorites have landed in South Africa, Antarctica, Russia, Canada and many other places. Because the small ones may look like dark colored Earth rocks, many meteorites land on Earth undetected.

The larger meteorites, however, leave craters in the Earth like the Barringer Meteor Crater in Arizona. This crater was created by the mainly nickel-iron Canyon Diablo Meteorite – about 55 yards (50 meters) in diameter and weighed approximately 150,000 tons – that fell to Earth almost 40,000 years ago. Meteor Crater is the first proven and best-preserved impact site on earth. In 1968, Meteor Crater was designated a Natural Landmark by the Department of the Interior.

BACK TO LESSON PLAN

How to Photograph a Total Solar Eclipse