“Complete and total success” reported Prof. Jay Pasachoff of Williams College, Williamstown, Massachusetts, of his team’s observations of the total eclipse, August 11. “From our site in Rimnicu Vilcea, Romania, we viewed the two and a half minutes of totality in a completely clear sky. We have already played back data from our hard drives, and we can see that we have fabulous scientific data. It should keep my students and me busy for years. 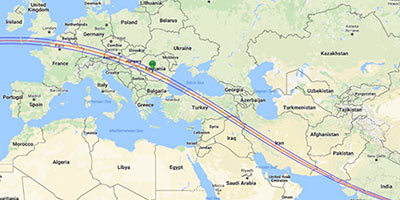 Path of The Millennial Eclipse of August 11, 1999, across Europe and Asia

“We had a dozen Williams students as well as some faculty and staff on site in Romania for two weeks. They set up and aligned some ton and a half of equipment. It all paid off with magnificent results.

“We are studying the outer part of the sun, the corona,” reported Pasachoff. The corona expands to envelop the Earth, so by studying it we are studying our environment in space. This year and the next two are especially active times for sunspots and other tracers of the sun’s magnetic field, so the corona was not only especially interesting but also especially beautiful this time. Bright streamers bristled from the Sun in all directions and red prominences gleamed out at the Sun’s edge.

“Our experiments were meant to study how the corona gets so hot, how its temperature changes from point to point, and how the magnetic field shapes it. The National Science Foundation, the National Geographic Society, and NASA, which funded the bulk of our expedition, should be very happy with us.”

We have twelve Williams College students, exchange students, and recent alumni with us. Bryce Babcock and Stephan Martin of Williams College, Lee Hawkins of Wellesley College and Appalachian State University, Jonathan Kern of Caltech, Allan Ridgeley of the Rutherford Appleton Laboratory in England, Marek Demianski of the University of Warsaw, and Paul Rosenthal of Williamstown comprise our staff.”

Dr. Ridgeley reports that his colleagues in Cornwall, though they observed the eclipse through clouds, were able to record the infrared spectrum of the corona.

Two members of the Williams College team were stationed at the Bucharest Observatory to try to make high-resolution observations of the corona with a 6-m focal length telescope. Unfortunately, a cloud covered the sun just at the wrong moment, and totality was obscured from this particular Bucharest site, though the eclipse was visible from various locations in Bucharest.

From the Black Sea, NASA’s official transmission site aboard a cruise ship captured phenomenal images and video. A photo by Michelle Gienow from the NASA site shows Venus glowing brightly beneath the Total Solar Eclipse. Richard Horwitz was also aboard a Black Sea cruise ship and provides a beautiful image of the Diamond Ring. He reported that the view was spectacular with no clouds.

As many as 350 million people in Europe and Asia live on the path of what was the last total solar eclipse of the 20th century. The event began in the Atlantic Ocean east of Boston, Massachusetts, and made first landfall on the Isles of Scilly where hundreds of people gathered to witness the eclipse. Cornwall in south-west England was the only part of the UK to witness the eclipse. The 1999 total eclipse was the first over mainland Britain since 1927 – the next will not be until 2090.

Stephanie Lester was one of twelve American citizens who traveled to Iran earlier this month to view the last solar eclipse of the millennium from the ancient city of Esfahan. Here is her diary from the day:

2:50pm: Today is the day of the eclipse! Already on this trip we’ve done so many wonderful things, but now we’re about to see what we came halfway around the world to see, and I am really excited!

To get the best possible view we’ve traveled to a resort area not far from the city of Esfahan, in Iran. Since we arrived we’ve met some other scientific groups who have also come to observe the eclipse. Some French astronomers have their equipment set up nearby and some Iranian scientists are here too. CNN and some Iranian news cameras have been filming us all day and just a few minutes ago they got a picture of my teddy bear sitting on a lawn chair wearing Eclipse glasses! It won’t be too long now before the eclipse starts, and I can feel the excitement in the air.

3:14pm: The eclipse has started! First contact just took place – that means that the edge of the moon has just crossed over the edge of the sun. Only about an hour before totality!

5:30pm: The eclipse was wonderful! It went by so fast, though! At first, the moon creeping over the sun didn’t really make things all that dark. After the partial eclipse had become 60% or so though, that’s when the air became much cooler and the light definitely became dimmer. We were all anxious for totality to begin, but there was so much neat stuff to do during the partial eclipse that the hour went by very quickly. One thing I enjoyed doing was testing out the pinhole effect: normally when light from the sun shines through a small hole and onto the ground or a dark piece of paper, you see a simple point of light. When there is a partial eclipse however, something great happens: instead of seeing a simple point of light on the piece of paper, you see a projection of the eclipse. In other words, you’ll see three fourths of a circle instead of a whole circle of light! There were a lot of fun ways to try this experiment out. One was to put your hand out, fingers spread, and look at the projection made against a wall. When I did this I could see miniature eclipses in between my fingers! We tried this experiment out with the sombrero-like hats that we had on. These hats had many, many little holes in them and when sunlight shone through them we saw forty or fifty little eclipses on the ground underneath! This was a safe and fun way of keeping track of the progress the moon was making across the sun.

Before long though the partial eclipse was 80% and it finally looked like dusk outside. When it was 90% people got really quiet and sat down in their lawn chairs staring up through their eclipse glasses. I did the same thing and made sure my teddy bear was right next to me, getting just as good a view as I was! As totality got to be closer and closer I remember suddenly feeling as if something incredible was about to happen! There was a large crowd on a cliff nearby that had gathered to get a good view, and when the moon had completely covered the sun they erupted into loud shouts of excitement and guns were shot into the air to celebrate. I knew that I could take my eclipse glasses off as soon as I could no longer seen anything through them and when I did, I didn’t see the image of totality that you normally see in pictures. Instead of the simple white corona you typically imagine when you think of eclipses, I saw brilliant beads of light around the edge of the moon change into the shape of a beautiful diamond ring right before my eyes! The diamond ring effect, which apparently happens because the moon has craters and is not a perfect sphere, was something that I had completely forgotten about and wasn’t expecting. But there it was! It was brilliantly white and stared right at me! By the time the “ordinary” corona that you see in pictures came about, I was so overwhelmed I just sat back and marveled at it!

All the experts seem to agree that the totality for Esfahan lasted over a minute and a half, but if you ask me it went by so quickly it didn’t seem like any more than a few seconds! After everything was over I asked the scientists what they all thought about it and what made our eclipse different from other eclipses. They told me that the corona was especially “active” during this eclipse because the sun is nearing something called “solar maximum” in its cycle. This made it even prettier to look at during totality. They also said that the sky didn’t get as dark as it usually does during an eclipse. This was probably because of all the sand and dust in the air. Any small particles like that scatter the light from areas where there might not be a full eclipse, over to our area and make it lighter than it would normally be.

7:05pm: Tomorrow is going to be a long day. We’ll wake up early and travel for a very long time. That means a lot of scrabble games on the bus and hopefully some more sleep. Today was a really amazing experience and I never want to forget it!

About Search for Common Ground and their Iran trip:

The American scientists gave presentations at two universities and viewed the eclipse with their Iranian counterparts while using science as a medium of understanding and goodwill. The delegation spent approximately two weeks in Iran, visiting a number of cities including Esfahan, Tehran, Zanjan, Kermanshah, and Shiraz.

Search for Common Ground, a non-profit, non-governmental organization based in Washington D.C., organized the trip. Search for Common Ground has been actively working to improve relations between the United States and Iran for over a year. The Zirakzadeh Science Foundation, a Tehran-based non-governmental organization, invited the American delegation to Iran and formally hosted the trip.

We thank Douglas Biesecker for the photos of Stephanie!