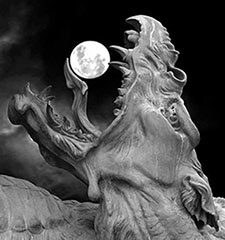 An invisible dragon eating the Sun

The earliest record of a solar eclipse comes from an ancient Chinese story. Historians believe that the eclipse referred to in this story might have been visible from China around 2134 B.C.

The Chinese once believed that an eclipse was caused by an invisible dragon eating the Sun. They believed that if they created a great commotion with drummers drumming and archers shooting arrows in the sky, the dragon would be frightened away and daylight would return.

When this eclipse occured, however, the two royal astronomers, Hsi and Ho, failed to predict the eclipse, and the emperor became very angry because he was not prepared to scare the dragon away. Although daylight returned, the emperor ordered the two astronomers beheaded.

The eclipse of May 28, 585 B.C., ended a war between two Middle Eastern nations. During the fighting, “the day was turned into night.” The eclipse stunned both nations into declaring peace and the fighting stopped.

The Bible refers to an eclipse that has been confirmed by historians.

Emperor Louis, son of the great European ruler Charlemagne, died after observing the eclipse of May 5, 840. It was said that he was so confused by the five minutes of darkness during the eclipse that he died from fright.

In India, the people also believed that a dragon was responsible for eclipses. During an eclipse, the people “immersed themselves in water up to their necks,” hoping that this kind of worship would help the Sun and the Moon defend themselves against the dragon.

Stonehenge under a beautiful sky on the Salisbury Plain in England. Photo by Mark D Phillips

For most parts of the year, the sunrise can’t even be seen from the centre of the monument. But on the longest day of the year, the June 21st summer solstice, the rising sun appears behind one of the main stones, creating the illusion that it is balancing on the stone.

This stone, called the “Heel Stone”, sits along a wide laneway, known as the Avenue, that extends from the northeast corner of the main monument. The rising Sun creeps up the length of the rock, creating a shadow that extends deep into the heart of five pairs of sarsen stone trilithons — two pillar stones with one laid across the top — in the shape of a horseshoe that opens up towards the rising sun.

Aside from the sarsen horseshoe trilithons that open in the direction of the sunrise, there are four stones, called “Station Stones” that may have played an astronomical role. These were placed in a rectangle around the main monument, within the ditch and bank that surrounds the circle of stones. These are believed to point out the moonrise, moonset, sunrise and sunset. Only two stand today.

20th century astronomer Gerald Hawkins proposed that Stonehenge, which he called a primitive astronomical computer, could predict events of the Moon and Sun as well as eclipses. Modern day astronomer, Fred Hoyle, tested Hawkins hypothesis. “I set myself the clearcut target of finding out if the stones that exist at Stonehenge could, in fact, be used to predict eclipses — and it seemed to me that they could.”

On Christopher Columbus’ last voyage to America in 1503, he and his crew were stranded on the island of Jamaica for over a year. With his ship badly damaged and the food supply low, Columbus traded with the Native Americans for food. The natives soon grew tired of feeding Columbus and his crew and refused to supply him with any more food.

Columbus knew that a lunar eclipse would soon occur on February 29, 1504. On the night of February 29th, Columbus told the natives that God was angry with them for not providing him with food. He told them that God was going to make the Moon disappear.

At that moment, the natives witnessed the beginning of a lunar eclipse. They begged Columbus to ask God to forgive them and bring back the Moon. After an hour passed and the lunar eclipse was ending, Columbus told the natives that God had forgiven them and the Moon would be returned. And of course, the natives looked into the sky and saw the Moon returning.

Write a creative story explaining an eclipse.
Share your story with your classmates,
(and send the best ones to us!)

What Do You Know About Our Sun?